During World War II Allied Nations recruited thousands soldiers and civilians to contribute to efforts by collecting intelligence and sabotaging enemy logistics as trained spies. Only in recent years has the role of espionage and spying played in the Allied victory become apparent. Following the 45th Infantry Divisions’ federalized transition to a regular Army force in September 1941, Echohawk was selected to attend what he referred to as “spy school”.

Chosen because of his unique ability to sketch what he witnessed after the fact, Echohawk attended one of the best kept secrets of the Allied forces during the war, a place called Camp X. Also known as Special Training School No. 103, Camp X was a noted Second World War paramilitary installation for training covert agents in the methods required for success in clandestine operations. Sitting on the northwestern shore of Lake Ontario between Whitby and Oshawa in Ontario, Canada, the area served as the location to train agents for secret operations of various sorts. Following the Japanese attack on Pearl Harbor in December 1941, the Office of Strategic Services (OSS) operated an "assassination and elimination" program that George Hunter White, the larger-than-life narcotics agent and spy trainer dubbed "the school of mayhem and murder.”

Given the code name Mistretta Blue, Echohawk could use any telephone, give his code name, and be connected to "Central Intelligence” where he could provide them with valuable information related to front line fighting. Because of his training, Echohawk and his squad of men from B Company became the go-to men for leading long patrols critical to success on the battlefield. You can read more about Echohawk and his time at Camp X in the forthcoming memoir on his time in World War II. 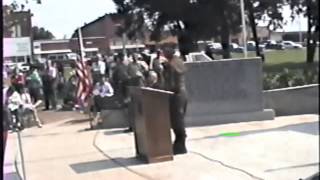